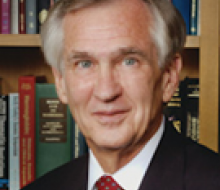 Dr. Benz received his MD from Harvard Medical School. He completed an internship and residency at Brigham and Women's Hospital and a fellowship at the National Institutes of Health.

The Molecular Pathology of Hemolytic Anemias.

Our laboratory continues to focus on the molecular pathology and physiology of red cell development, the molecular basis of inherited hemolytic anemias, and the use of the red cell homeostatic system as a model to study gene regulation and growth control in other tissues.

During the past five years, we have focused on the structure, function, gene regulation, and molecular pathology of protein 4.1. This cytoskeletal protein, originally described in the red cell, forms a ternary complex with spectrin-actin, and attaches the spectrin latticework to membranes by binding to the cytoplasmic domains of key transmembrane proteins. Defects in this protein are associated with hereditary erythrocytosis. Our laboratory has shown that many isoforms of protein 4.1 arise from a single protein 4.1R gene by tissue-specific alternative inRNA splicing pathways, a number of which we have characterized. Our group has identified at least three target sequence areas and one putative splicing factor involved in tissue-specific regulation of red cell isoforms during erythroid differentiation.

Isoforms of protein 4.1R are expressed in many tissues and exhibit complex patterns of intracellular localization. We have shown that some forms associate with NuMa, a key mitotic protein, and are components of the mitotic apparatus. Other domains of protein 4.1R participate in tight junction formation by binding the proteins ZO-2. Moreover, as cells approach the state of terminal differentiation, there is a clear shift from the intranuclear localization of protein 4.1R to peripheral localization. Current stadies are pursuing the hypothesis that this complex shift in localization and association is indicative of a role for protein 4.1R in signaling terminal differentiation and initiating shutdown of cell proliferation and division.